DEAR JERRY: Last year you wrote about the Fleetwoods. You also told of Gretchen Christopher, their founder, writing some songs for a new album.

I got the impression she had an unusual concept album planned.

Has she since completed this project?
—Gary Morgan, Boise, Idaho

Among its accolades is being named a Billboard Critics Pick as one of the 10 Best Albums of 2007.

Unlike most concept albums, Christopher's “Sweet Sixteen (Suite 16)” is a completely truthful soundtrack of her life (including the Fleetwoods experience) and, more importantly, her first love (inexplicably, someone other than this journalist).

Gretchen wrote and arranged all of the music to tell the story as it happened. She also created an insert booklet, with fascinating text and photos, all of which enhances the listening experience.

Music historians should now find it easier to define a concept album, as “Sweet Sixteen (Suite 16)” is the model of the genre.

It is fitting we talk about Gretchen's album this week, since February 29th is her 17th birthday. For another 11-plus years, this leap year baby will still be a teenager.

For more information about Gretchen and “Sweet Sixteen (Suite 16),” click the image below. 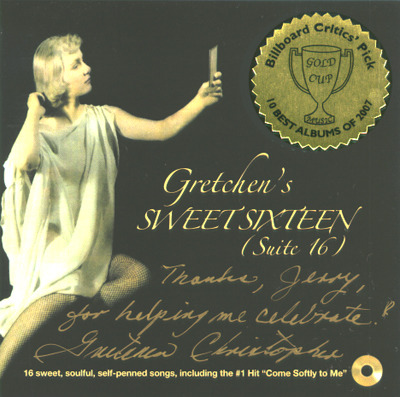 DEAR JERRY: With so many reruns caused by the recent television writers' strike, we have been enjoying an “Ally McBeal” marathon by playing tapes of the original episodes.

We're fortunate to have the cassettes since, except for a two-disc highlights sampler, this award-winning series may never be available on DVD, unlike nearly every other popular show.

More confusing is “Ally McBeal: The Ultimate Collection,” a 30-disc set with every episode, can always be found online (eBay, Amazon, etc.), but is quite pricey. Most are in the $150 to $300 range.

Also of concern is these sets are from another country (China, Australia, etc.) and some sellers caution buyers that the DVDs may not play well on U.S. systems.

Why such a dilemma? Makes me glad we saved our VHS tapes.

This series has the most fantastic music, by Vonda Shepard as well as guest Pop and Rock stars. The way every song fits neatly into the script and scene is pure genius.

Were the scripts created first and then the songs written or chosen, or the other way around?
—Michael and Millie, Chicago

DEAR MICHAEL & MILLIE: You are correct about the high price in the U.S. for “Ally McBeal: The Ultimate Collection,” especially considering possible format incompatibility.

Interest in Calista Flockhart (“Ally”) is also getting a boost from her current gig, as Kitty Walker on “Brothers and Sisters.” Based on these two roles, one might refer to her as Ally Kat.

Since we often get questions about the '50s, '60s and '70s music on “Ally McBeal,” having the complete series on hand is essential.

Seeing the inflated domestic prices, I ordered via DHgate.com, a very reliable web site based in China. Through them the complete set is usually available for under $40.

About $35 more covered EMS (Express Mail Service) delivery to the U.S., and it arrived in less than a week.

Every phase of the transaction was just perfect.

This collection, like many DVDs made overseas, is Region Free, meaning it should play okay regardless of one's location. Using an ordinary Region 1 (U.S. format) player, I found the Chinese set acceptable, but not perfect.

Then I bought a Multi-Region unit (about $75) which plays all formats, regardless of country of origin. With that, most of the “Ally” discs perform flawlessly.

Reportedly, the complete series is not yet on DVD here because of the one thing you like most — the music. Those issues, which seem to involve copyrights and licensing, apparently are of no concern overseas. In time, this obstruction will likely be resolved.

As for interweaving the music and scripts, here to explain things is the show's creator, writer, and executive producer, David E. Kelley:

“When it comes to picking the songs, most of the time the scripts are written first then I go in search of music or songs that are germane to the script.

“Other times I'll hear a song and it will spark an idea for a story, and the cart will precede the horse.

“The music not only promotes those scenes emotionally but also informs viewers of your characters emotions.

“So it's a great luxury for me as a storyteller to have music.”

IZ ZAT SO? Most of the “Ally McBeal” ensemble cast can sing, though Jane Krakowski is an especially gifted vocalist.

This Golden Globe nominee, for her McBeal role as Elaine Vassal, is also a veteran singer/dancer/actress of several Broadway shows.

Notable among them is the 2003 revival of “Nine,” in which Jane's performance as Carla won the Tony Award for Best Featured Actress.

James Marsden, cast as Glenn Foy in the fifth season, demonstrated his singing skills in the show, especially doing the styles of Frank Sinatra, Dean Martin, and Elvis Presley.

I am not aware of any commercially issued recordings by Marsden, which is a surprise considering how good he is.