“STAY AWAY, JOE”
The Incredible Story of One of the World's Rarest Record Albums! 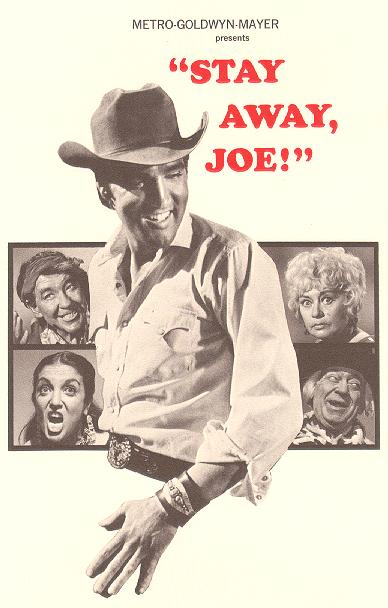 Before October 1999, any Presley fan or record collector — including those known worldwide for their Elvis expertise and vast collections — would have sworn that no LP ever existed titled “Stay Away, Joe.” Not even Jerry Osborne's comprehensive Elvis price guides and reference books documented such an item.

Now it is of course covered in the current edition of “Presleyana.”

Such a closely kept secret was this LP, that not even a rumor of its existence leaked out to fandom. Furthermore, we have yet to find anyone that worked for All Star Shows in the '60s that recalls anything about this album. Unfortunately, those who would know — Col. Parker, Tom Diskin, etc. — are deceased.

There is also no mention whatsoever of this broadcast in any of the “Elvis Day By Day” type books that attempt to chronicle such events.

As with most of RCA's promotional releases in the '60s, UNRM-9408 (identification number used since no selection number is shown) has a white label with black print. It is a single-sided disc, side two being blank. 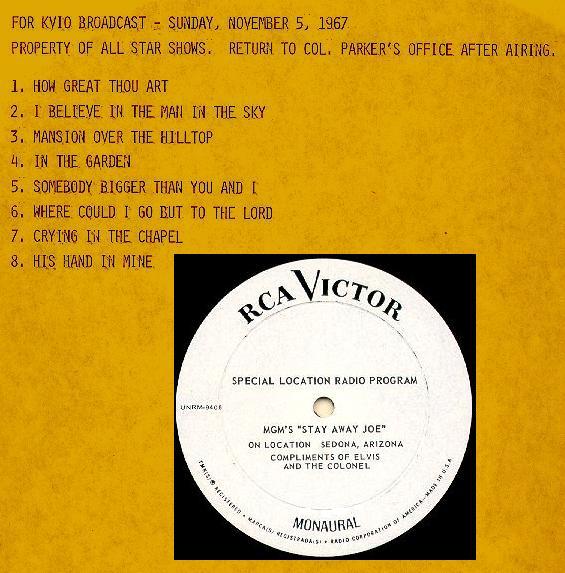 A plain paper inner sleeve has track titles typewritten, along with the following statement: “For KVIO broadcast, Sunday, November 5, 1967. Property of All Star Shows. Return to Col. Parker's office after airing.”

Interestingly, only eight tracks are listed on the inner sleeve though the program includes nine! Missing from their list is “In My Father's House,” which is Track No. 2. What is typed as Track 2 (“I Believe in the Man in the Sky”) is actually No. 3, etc.

The Colonel seemed determined to get his copy back after the program aired, which he did since it eventually surfaced as part of the Parker estate.

Unbelievable though it seems, this 12-inch album was made for a one-time broadcast by only one radio station — KVIO in Cottonwood, Arizona, a tiny community southwest of Sedona. Ensuring the show ran exclusively on this station is the mention by the host during the show itself of the call letters: K-V-I-O.

Do not confuse this LP with an acetate, factory experimental disc, transcription, or test pressing of any kind. This is a standard production disc, manufactured (i.e., stamped or “pressed,” not “cut”) exactly like any normal commercial or promotional record.

This self-contained 30-minute program features nine of Elvis' gospel tunes, along with announcer Joe Adams (borrowed from KOY in Phoenix) thanking Sedona and Cottonwood for the hospitality shown the cast and crew during production of the film, “Stay Away, Joe.” Also included is publicity for Elvis' two gospel albums (“His Hand in Mine” and “How Great Thou Art”) as well as the upcoming (December 3, 1967) Special Christmas Radio Program.

Click here to download the beginning and end of the
“Stay Away, Joe Special Location Radio Program.” (440k - MP3) 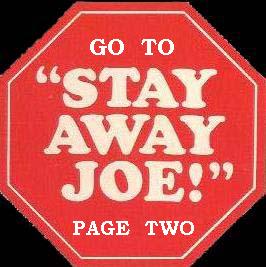